A little different from the norm, but as I’m such a Stephanie Plum fan, I couldn’t resist! 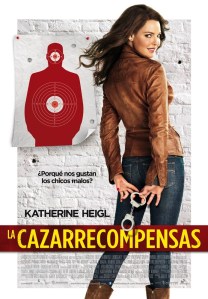 Is it just me, or is that poster so much better than the one we got? Too bad the film didn't live up to it. 😕

I’ve been trying to get through the book series, and I’ve read up to 17.  The first dozen are a riot with cute plots, sometimes-scary suspense and definite laugh-out-loud humor.  Evanovich does a wonderful job playing each character off the other, and her hilarious situations always make me happy.   I’ve used this series as a break between more “serious” books since I’m guaranteed to be smiling afterward.  It’s been fun to see them evolve over the years and while I’m not totally keen on the upped comedy vs mystery in the past few books, they are still a diverting read.

My two favorites?  High Five and To the Nines.

So imagine my excitement when it was announced that a film was finally in production!  My friends and I anxiously scanned for tidbits on who would play which character.  The choices seemed odd – Debbie Reynolds as feisty, funeral hopping Grandma Mazur??  The trailer looked flat and the characters seemed wrong, but I was going to go in with a hopeful heart that they would “get it right” – or at least not botch it up completely.

We went to see the new movie opening weekend with the same friends and arrived 15 minutes before showtime.  Thinking this was plenty of time to buy tickets and the obligatory coke, we ambled up to the doors only to be met by a massive line! This left me feeling even more hopeful since they couldn’t disappoint us all, right?

I’d give you the rundown bit by bit, but I don’t want to bore you.  Ultimately, we all thought it was “cute.”

If I were to go on about the casting, we’d be here all night. But I can’t resist just a smidge.  😈

To me, Stephanie Plum is a great character.  She’s a foil for all of the craziness around her, but she’s also got her own touch of eccentricity.  She’s easy to like and hilarious.

Katherine Heigl wasn’t quite as bad as she seemed in the trailer, but she wasn’t that great either.  A dull performance and an almost deadpan delivery meant that Stephanie Plum lost all her liveliness and became a cardboard instead.  In fact, Heigl was more ditzy and flat than any of the other struggling/over the top actors.

In fact, it was a miracle how they were able to act with such lackluster while still over doing it.  Ranger was boring but became a talker.   Lula was just “cute” with hardly any edge and even Vinny became just a schmuck without the duck (I mean, come on! You can’t mess with the duck!).

Everyone was just too normal.  You could tell that they had been given a rundown of each character, but they seemed to just ignore it and incorporate ham wherever personality was required.  There’s a teeny bit of violence that comes out of nowhere but even that was tamed down.  No psycho stalking, no strategic attacks – what little we do get seems strangely out of place.

It was odd how they could have squeezed the fun out of Big Blue, but they achieved even that!  😯

I know, I know – reviews of movies from fans of a book series are typically negative.  “It’s not as good as the book” has been said a million times, but I want to add something to that:

It’s not as good as the book, but it sure could have been worse.  😉

Go watch it if you want something a bit cute and fun to divert you.  Just be sure to grab some popcorn to keep you from zoning out.