Yesterday we walked all over town.  We walked so far out and down new roads that we weren’t sure if we were heading back home or the next state.  I love to do walks that ramble.  Since it was a beautiful day for exploring, we took advantage of it and headed out for over an hour.

Today, my body is reminding me that it isn’t quite so keen on spontaneous marathon walks.

So, to give the old leg a rest, I did a yoga routine and baked buns. 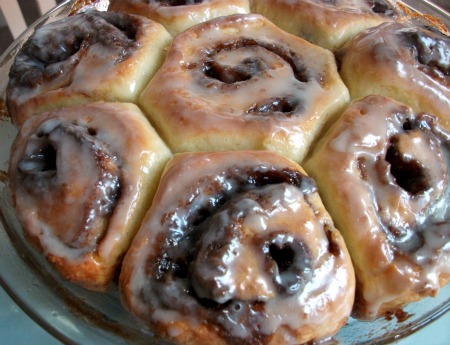 The cinnamon and clove combo when baking is to die for.

I never thought about using clove with cinnamon in my buns before, and I have to say that it blew me away.  The flavor of the cinnamon was enhanced and highlighted by the dash of clove.  It’s my new tweak that I’ll do every time I make buns.

They baked up perfectly and I loved how it was a smaller recipe than my normal go-to yeast bun recipe.  This recipe touted speediness which was just what I needed this morning, but it ended up taking me forever to bake these.

Don’t get me wrong, they were delicious, but at the same time, the recipe seemed to have a flaw in the proportion of liquid to flour which produced a very WET dough.  This meant a lot of additional flour incorporation and over-kneading that produced a chewy and dense bun.

(I didn’t use nearly as much butter as was suggested and I made a different glaze that was part powdered sugar, yogurt and vanilla.  I also only used 1/3 cup of brown sugar instead of the suggested 3/4 cup and we both agreed that we didn’t miss it at all.  If I were to make this again, I will either add more flour to the initial mix or less “buttermilk”.  I’ll probably be trying out other recipes before that, however.)

Still, we gobbled up over half of them by the evening with only 3 left for tomorrow’s breakfast.  You can’t accuse us of wasting food. 😉

There have been a couple of recipes that have really surprised me with their yumminess and simplicity.

(I swapped out the sour cream with yogurt and used nonstick spray rather than oil.  I also only sprinkled Parmesan on top of the salad rather than using the 3 tbsp it called for. )

The recipe calls for smoked sun-dried tomatoes, which I didn’t have, so I used regular.

Trust me, I wasn’t missing it.

This lentil taco recipe is another keeper.  It’s spicy, it’s got a wonderful mixture of tastes and textures and I love how filling it is.  I made this up quickly for my dinner and I had enough for many more tacos in the future.  It freezes really well, so it’s a wonderful recipe to have on hand. 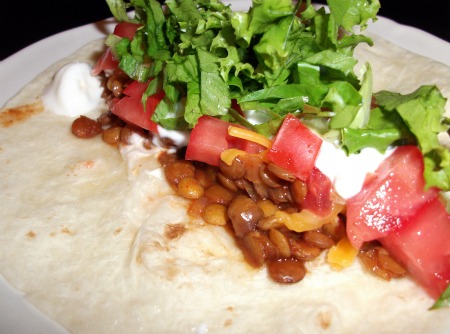 I eat blueberries with my breakfast every morning and while I have been dying to make My Baking Addiction’s Blueberry Sauce since she posted about it, I’ve been reluctant to give up my beautiful blue balls all at once.

Then last Friday the hubby requested pancakes for breakfast rather than our normal oatmeal.  I knew I had just a cup of berries left in my pot, so I set to making the blueberry syrup.

And was I sure glad I did, too.

The Blueberry Sauce was just the right thickness and the taste of the blueberries truly shined.  I loved how there were still whole berries by the end of the cooking since I dislike just liquid.

I did make a few tweaks to her original recipe.  You can find her recipe here, but mine is below with alterations in red.

2 thoughts on “Walking my buns off…And other recipes”