You know you are a bird fanatic when you cook healthier food for your bird than for yourself.  And I eat pretty darn healthily, too.

The vet suggested a low fat diet so we have been making changes to Eddy’s daily food schedule.

Well, the vet said to scale back the premium blend since it contained seeds and cut down on the peanut butter (even though he was only getting a small amount once a week).  We now give him just 1 tablespoon of the blend and a 1/2 cup of the pellets.  This gives him a lower fat ratio and more nutrition.  He does love his seeds (it’s all he was given for 17 years) and roots about for them first thing, but it’s for the best.

Our vet also suggested putting him on a more regimented schedule.  He gets a breakfast full of fresh veggies, fruit and grains.  I then take it away after a couple of hours.  At around 5 pm he gets his pellet and seed mix until bedtime when I take it out again. 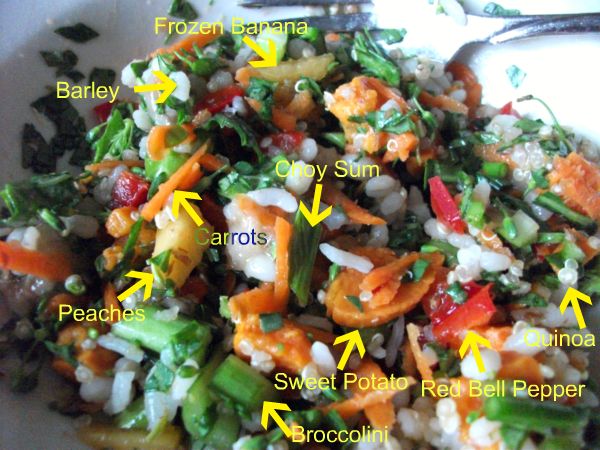 It’s called “chop”.  You can find a few recipes online, and I’ve listed a couple that I drew inspiration from at the end of this post.

Chop is a mix of what’s in house, really.  I buy veggies at the store, usually ones that I’ll be eating that week anyway, and fruits that are in season.  Every morning, I wake early and chop up a leaf of this or a slice of that.  Most of the sites listed talk about making huge batches of chop and then freezing it for future use.  I’d love to do that.  Unfortunately, I have a bird that’s a bit finicky about his food and dislikes thawed food.  I tried it and he just ignored it completely.  The only thing I can make ahead is the quinoa, barley and sweet potato.

After I get all of the “wet” ingredients together (drain those ingredients that are really soggy), I sprinkle some flaxseed meal (just a bit) on top and a little crushed Quaker Oatmeal Squares cereal.

Sometimes I heat his chop in the microwave.  When I do, however, I make sure that it’s cooled down a bit before I give it to him.  You don’t want to burn your bird’s crop!

If you have one bird and need to feed him/her chop in the morning (or for dinner), here’s what I do.  Btw, does this count as a recipe? 🙂 I think I just might make him his own category on the recipe page.

(Note: There’s no fast rule about this, except know your bird species.  Some birds can’t eat certain things.  Also be sure to wash everything really well before you add it to the food bowl.  It’s also all fresh, so throw it out after a couple of hours in cooler temps.)

Makes about a half cup of chop. 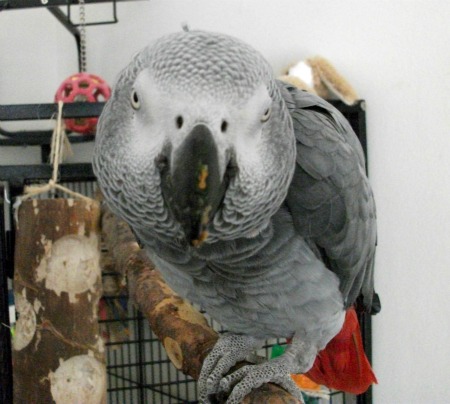 Could you get me a napkin?

Eddy loves to watch me make his chop in the morning.  I always include him in the process, although I usually don’t let him nibble.  I want to be sure that he’s good and hungry for the chop when it’s done.

Like I said, you can vary the ingredients.  Sometimes he doesn’t get barley or banana and other times he gets bits of celery or rice.  Just be sure you know what they can eat and that you don’t overdo things.  Eddy is a picky eater so he never finishes all of his chop.  If your bird can down it all quickly, then you might want to rethink quantities.

Other Recipes for Chop 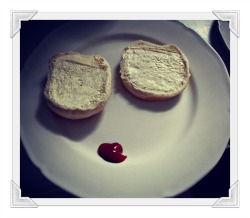